A downloadable game for Windows

//No longer in development. Sorry!

Escape a place of corruption, where you will be tested by the dark and bound by the light. Fight to become stronger, more powerful, and escape your fate.

Shackled is a 2D 'Souls-like' RPG with heavy inspiration taken from the Souls series, Diablo II, and various 2D Roguelike games, with a core focus on solid combat mechanics and various play styles supported through itemisation.

Currently the game features a short introductory tutorial level followed by one main playable level, in which the player fights through a dungeon. There are six base enemy types to fight, including two boss variations, random loot drops, and various possible stat-based character builds.

In addition to updating current and in-development content, we plan to release additional levels to expand on the story and world locations in order to see the player through to their end.

Supports play with both Keyboard / Mouse and Xbox controller.

The main character model looks like a straight rip-off from Eitr. Maybe you should do something about that.

Appreciate the feedback on the similarity. This project is no longer in development but I will make a note of this in the case development resumes at some point in the future.

Hey, I am bad at these sort of games so take the deaths in the video as just user error, but  I found the world simple in view but with plenty of detail and oddly engrossing. I hope you add more stuff to it as I had a lot of fun learning the little nuances to the battle system and even being splattered to the four winds.

- how it's about making good decisions.

Making a mistake can cost dearly, which goes well with the slow speed and dark atmosphere.

- The boss! at least on the second encounter.

- warp to a previous save/rest point.

Or being tempted to risk 16 blessings

For a chance of conveniently finding the next save point

- there's a bug where sometimes you can't walk.

Which can mess up your combat. I got "stuck" a few times.

- Make the character button on a far away button

to prevent accidental pressing during combat.

- Make judgement info appear somewhere on the screen that's out of the way.

- I can still block an attack if hit from behind

I personally think you should take extra damage for making a crucial mistake.

- don't make bosses any easier if you die.

(Unless it's on easy difficulty)

Cuz I got confused at first, thinking it wasn't the right attack.

Creepy and difficult in a cool way.

I keep accidentally using potions when I wanna pick up something, though. Maybe it's just me, though; I don't play a lot of games.

Cool game thus far! Spent probably a good hour or two on it. I hope it's still being worked on!

Firstly, love the style and atmosphere it has. I do wish there was more variety with the enemies and places, though that will obviously come in time, I'm certainly aware of how time consuming it is to develop a game!

As for the current enemies: each enemy feels different, which is great! Though some that looked the same took roughly 5-6 hits as those that took 1-2, so I was slightly confused as to why, since they don't scale with the level of the player, since the lesser ones still took just 1-2 hits.

Love how there's a heavy attack, but it seems quirky. As far as I could tell, heavy attacks did hardly any extra damage, if it at all had an increase. The knockback was unsatisfying. Sure a light attack seems fine without it, but a properly timed heavy should create some distance between the player. Or perhaps, since it's a stab attack, it could have extra reach.

I would personally recommend that leveling and judgments only increase stats by a tiny bit. This would make the game more skill based. Item drop increases become way too important when your level up items (light?) are just regular drops affected by the item drop stat. The stamina delay was also super important it seemed, because you use it so often and the delay is already pretty long. When I came across a stamina delay modifier, I dropped a pretty good item just for that so that I didn't have to always back off from an enemy all the time.

Hopefully environments will become more unique as development progresses. A map would be nice with the game the way it is, but if everything (or most everything) was unique, it would be harder to get lost.

Now this is a design choice, but hear me out: shortcuts. Locked gates, particular elevators, doors that open from other side etc.

I would personally suggest more shortcuts and less checkpoints. Makes the game seem less linear (though it's not! But it's so maze-like that I found myself just crossing my fingers, picking a path, and hoping I find the next checkpoint. This is because doubling back to check the other routes got me lost a few times) or at least more connected.

Just a few more notes, which are obviously just suggestions from one dev to another. Ultimately it's your game, so do what you think is best for your vision! But I study game design and I think these notes could possibly help :) Sorry this is long.

HUD bars and whatnot are rather bright compared to the greys and blacks of the game. Love the look of it and whatnot, I just think the colors should be dulled a bit.

Camera gets a little glitchy while running into a wall. Being able to dodge through caster's attacks would be welcome.

Lock on button could maybe be bound to the 'S' key instead of 'Q', Since left and right are the only directions of movement, S could be a nice resting place between the movement buttons. Also, you could possibly free up the Tab button by having the lock on button change the locked on enemy when pressed and unlocks while held.

Please implement a sprinting mechanic, unless there is one and I missed it. Maybe Shift while moving? (I would suggest lowering the amount of key bindings as much as possible. That hurt my first game, having too many buttons for people to remember)

There isn't currently a way to save yet, is there?

All in all though, it's a fun game!! Sorry if it seems like I tore it apart in this, but honestly, I took the time to write this because I see potential in this game and I would like to see it be the best it can be!

I'm impressed with the visuals and the pacing feels nice! Good job!! Hope to see this project get finished. Take care!

It's a good game. Can't wait the development of this game. ^^

This is a really cool style. It'd be nice if you could sneak up on enemies though.

Glad you like it, and sneaking up on enemies is definitely something we'll look into adding. Thanks for the feedback. 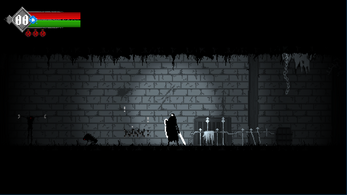 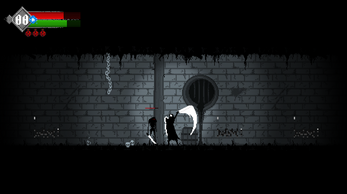 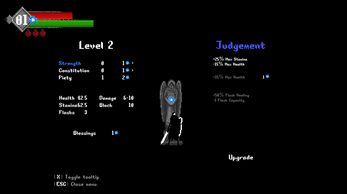